The Espace Killy ski area is named in honour of the famous French ski racer Jean Claude Killy who won triple Olympic Gold at the 1968 Winter Olympics and dominated the downhill ski events at the World Championships in ’67 and ’68. It’s a fitting tribute that two of France’s most well-known and best ski resorts are named after one of its best ever skiers.

Whilst you may not have heard of l’Espace Killy, you will most certainly have heard of the twinned resorts that the ski area encompasses. Tignes and Val d’Isère are connected by the 300 kilometres of fantastic skiable terrain in the area. This includes high alpine, gladed trees and two glaciers. 150+ ski runs and 1,900 metres of vertical descents with varying difficulties to explore. It’s an area you’ll keep coming back to winter after winter.

If you’re thinking of heading to this incredible ski area this winter check out our Espace Killy lift pass deal where you can save up to 50% on your pass. This can be booked with both apartments and chalets and can be combined with our Ski-All-In deal. Want to learn more? Then keep reading below:

What’s the difference between Val d’Isère and Tignes?

Despite sharing the ski runs in the Espace Killy, the actual resort villages are very different.

Val d’Isère is stretched along a main street, slowly enveloping the hamlets at each end of town, La Daille and La Fornet as the years go by. You can walk from one end to the other in about forty minutes. However the resort centre is a hive of bustling activity at almost all hours, which you can’t help but be distracted by.

Tignes on the other hand is really a collection of purpose built resort villages; Le Lavachet, 1800 and Les Brévières. Here the Lac de Tignes is a major focal point between the main villages of Le Lac and Val Claret.

Due to the geography of the area the villages are spread out from each other. Therefore taking a bus between them is usually the best mode of transport. Each village has everything you’d need including mostly ski-in/ski-out accommodation. But the temptation to explore the variety means you’ll want to go back next year to see why the grass always seems to be greener (or snow whiter, we prefer).

Snowboarding and Skiing in l’Espace Killy

In Val d’Isère, le Face is the piece de résistance for any brave skier or boarder. The men’s Olympic downhill run is steep and long enough to turn even the most iron of legs into jelly by the bottom. But “Anything you can do” says Tignes, as it throws the 10km long ‘Le Sache’ into the mix. From the top of Aiguille Percée, this thigh-burning run dissects the valley all the way down to Tignes-les-Brévières.

For beginners and intermediates Val d’Isère offers 19% green runs compared to only one solitary green in Tignes. However over half the marked runs in Tignes are blues. Overall, Tignes probably has more to offer the intermediate, as the easier runs are wider and less crowded on the whole. Check out the Prariond run from the top of the Fresse chair.

For some quiet time, Le Fornet in Val d’Isère and l’Aiguille Percée in Tignes will often feel deserted in comparison to the rest of the area. Lots of uncrowded slopes, minimal (if any) lift queues and some immaculately groomed pistes to carve especially first thing in the morning. 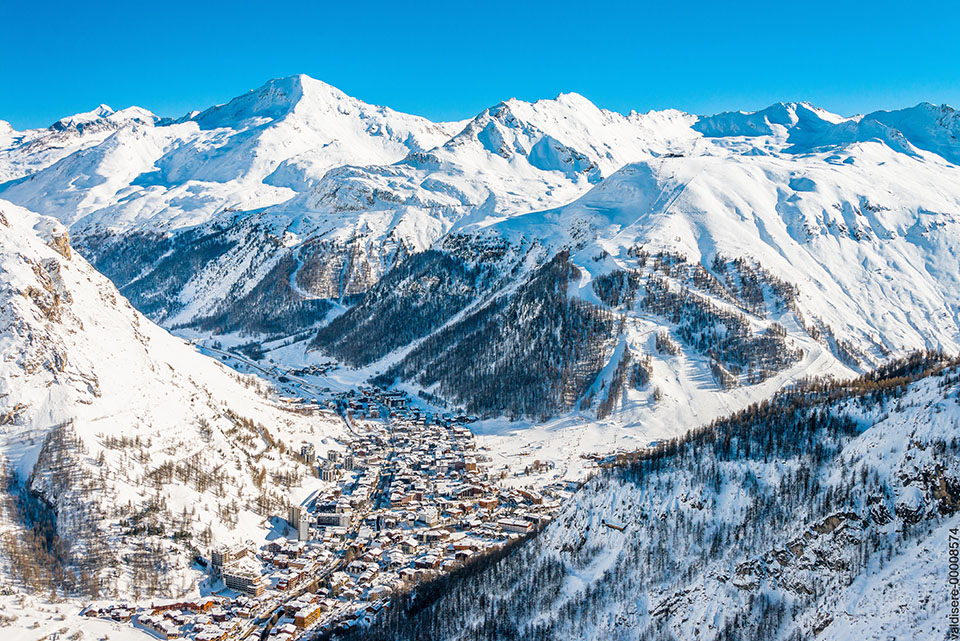 Ski ‘round the world’ in Tignes and Val d’Isère

A great way to experience some of the best ski runs Tignes and Val d’Isère is to try our seasonaire’s favourite ‘Round the World’ route:

Seasonaire Tip: If you keep your speed at the bottom you can make it all the way to Aspen Burger for an early lunch!

Top 5 reasons to ski in the Espace Killy

So are you convinced to visit this incredible ski area? Start booking your trip with Skiworld today and visit our Espace Killy promotion where you can save up to 50% on your lift pass. Remember you can take advantage of this deal by booking chalets or apartments.