Vail Resorts have packed yet more value into their Epic Pass for the 2016/17 season! In addition to the current bounty of North American ski resorts – Vail, Beaver Creek, Breckenridge, Park City and Heavenly – today Vail Resorts announced it will add Les 3 Vallees, Paradiski and Tignes-Val d’Isere in France, Skirama Dolomiti Adamello Brenta in Italy, 4 Vallees in Switzerland, and Arlberg in Austria to the line-up! The world’s most popular ski pass just got even more Epic! 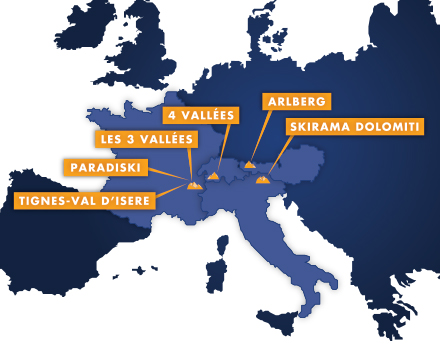 “There is nothing in the ski industry today that can compare to the value of the Epic Pass,” said Kirsten Lynch, chief marketing officer of Vail Resorts. “The value of the Epic Pass is giving skiers and snowboarders the flexibility to ski when they want and the choice to ski where they want, and the variety of experiences our resorts offer, whether it’s the iconic slopes of Vail or Park City, or the grandeur and tradition of Europe, which should be on the bucket list of every skier or snowboarder. Whether you ski five days or 100, no pass is tailored to the way skiers and snowboarders actually want to access the best mountains in the world like the Epic Pass.”

Verbier, part of the 4 Vallees ski area, is the largest resort in the Swiss Alps, is acknowledged as one of the premier “off piste” resorts in the world, and is home to a number of professional freeride competitions. Above and beyond this reputation, Verbier is well-known internationally for its electrifying, cosmopolitan nightlife, and the resort is proud of its legendary apres-ski and its lively clubs. While skiers and snowboarders from all over the world rave about this off-piste paradise and fun evenings, families also appreciate the resort’s social atmosphere and family-friendly offerings.

For decades, the mountain range between Tyrol and Vorarlberg, which is home to Arlberg and the resorts of Lech, Zurs, Stuben, St. Christoph and St. Anton, has been a highly sought-after metropolis for international ski and snowboard enthusiasts. Arlberg is widely considered the cradle of modern skiing and in December 2016, thanks to the opening of four new cable cars, it will be Austria’s largest linked ski area. Also the birthplace of champions, athletes from Ski Club Arlberg have garnered an incredible 83 medals at various Olympic Games and World Championships.

Access to the European ski areas is described below:

Vail Resorts encourages guests to purchase pass insurance. All of the Company’s season pass products are non-refundable and non-transferable; however, pass insurance covers pass holders in the event of unexpected circumstances including sickness, injury and job loss.

The Epic Pass – £623 per person until the 5th September